At the MIT Reality Hack 2022, Zane Giordano, a University of Texas at Austin student from the School of Design and Creative Technologies, and his team were awarded Overall Gold for Best Project and Winner: Best Use of Microsoft Reality Toolkit (MRTK). The competition, which took place on the MIT Campus in Cambridge, MA this spring, wasn’t even on Giordano’s radar until a chance encounter mentioned the MIT Reality Hack event to him at one of his monthly Texas Immersive meet-ups during SXSW. Giordano was immediately interested and was lucky enough to discover that the registration deadline to participate had been extended for that one night only. He took it as a sign, filled out the application in one hour, and three weeks later brought home the Gold.

“It was a truly an amazing experience and really changed my perspective on how my AET education applies to the real world,” said Giordano in thinking back on the entirety of the event.

We spoke with Zane Giordano post-win to get the inside scoop on his project, the hack experience, and what’s next for the Arts and Entertainment Technologies Senior graduating in January 2023.

What is the MIT Hackathon?

The MIT Reality Hack is a competition-style event where 250+ people from the immersive industry including college students, recent graduates, and both new and seasoned programmers and designers from the industry, come together for a 5-day marathon of workshops, classes, networking, and the chance to collaborate on a project to win a prize. Teams are formed on-site and tasked with creating a solution to an existing problem utilizing specific technology. Each team has 2 and a half days to build a fully functioning solution before presenting it to a panel of judges including MIT faculty, and representatives from Microsoft, Magic Leap, Snapchat, and Solana.

What is the hardest part of a Hackathon?

I think the most intimidating part is finding your team. For this hack, we walked into a room with big white papers on the wall with specific technology and we were supposed to write down ideas we might have to start conversations with other designers or programmers. Groups were forming fast. It can be uncomfortable, but you just have to put yourself out there, walk up to people, and ask them if they have an idea or if they need a designer. The team I ended up with were two developers with an initial idea and they were looking for a designer. It’s usually the opposite way, so I jumped on it.

What classes prepared you for this challenge?

The AET Game Development classes were important, but I think all of my classes have had different components where I had to adapt to new platforms and learn new software in a short amount of time, so in a Hackathon, when I had only two and a half days to design, I was able to learn and move quickly. I also took a class last semester, "Next Level Arcade" with Assistant Professor Jessie Contour. We built an entire game in Arduino where we had to make an alternate controller videogame. So I understood the basics and had a base level which prepared me for designing for the Hack.

What was your Gold-winning MIT Reality Hack project?

We created an educational cross-platform AR circuit design tool to teach younger students how to build basic circuits with Arduino. We used the power of the Microsoft HoloLens 2, Unity 2020 3.28, and Microsoft Mixed Reality Toolkit (MRTK) to create an intuitive, fun, and powerful circuit design tool that allows anyone to create simple custom circuits and understand how they work.

We originally designed it to be for people can make Arduino projects, but once we were designing it, I knew we had to pivot. It made more sense to move to an educational project and make it a tool to bring people who don’t know how to use it into this world. I was able to identify why we were building this, and who we were building it for, something my Texas Immersive experience helped me with. I was working with talented developers who trusted me as a designer to orient our project and hit a need that existed.

What about that Arduino pirate?

We were sitting around talking about Arduino, and one of us, just said it pirate-like, ARRR.duino. Then we all kind of said it, laughed and decided to go with it. It made it fun and less sterile of a tech demo. The judges could also tell that we had fun making it. One of my teammates actually stayed in character throughout the presentation.

Where do you take ARRR.duino after the event?

It is hackathon culture to leave your projects behind. That being said, I think ARRR.duino hit a lot of marks. Right after we won, we met with Senior Engineers from Microsoft who want to help support us in building this out further. But there’s one missing piece, the Microsoft HoloLens 2 is an essential hardware component. If anybody at Microsoft or elsewhere, wants to send me one, I’ll send my address!

Do you have any big takeaways from the Hack experience?

It’s important to first think about how you are going to use the time in the most impactful way possible. We set out to use the technology in a way that hasn’t been done before, solve a hyper-specific design problem, and do it in an engaging way. We took a fun approach that answered a need, and we nailed that hackathon. (You can read about all the tech details, challenges, and accomplishments here.)

Get involved and supplement the things you are doing in your classes with an actual production organization where you learn how to create with constraints, how to work with a client, and how all the things you are learning apply to real-world situations. If you want to chat about my experience, just reach out to me.

Right now, I’m focused on finishing my Senior projects, looking for summer internships and jobs starting January 2023 when I graduate. Check out my site www.zanegiordano.com to see more of my work! 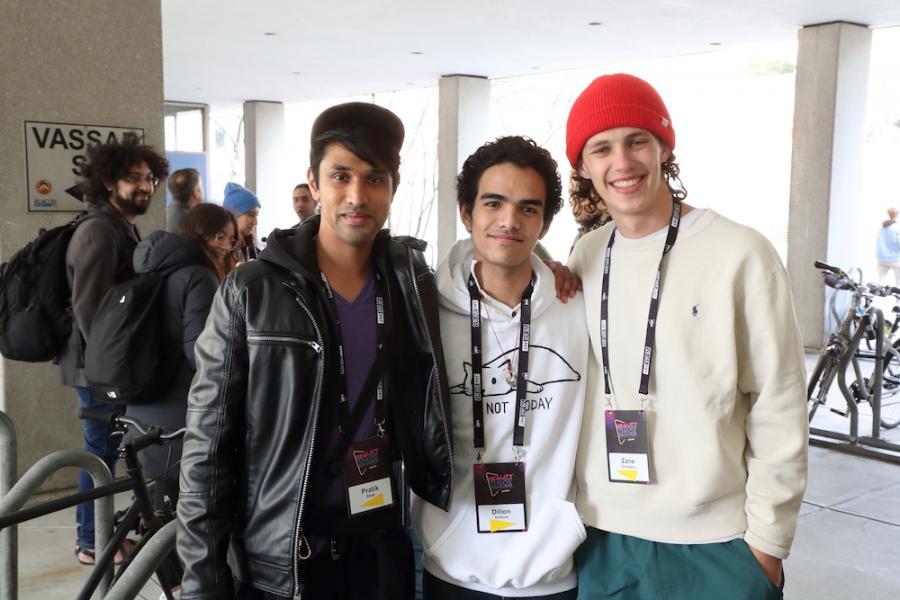